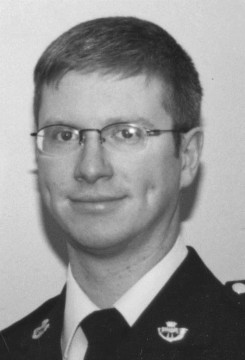 Darren Richard Hart of Lot 7, Concession 8 joined the reserve unit 4th Battalion, Royal Canadian Regiment in Stratford in 1991. While at Carleton University in Ottawa, he became a member of the Governor General’s Foot Guards, also a reserve unit. Over the years he continued to train, mostly at Gagetown, N.B. In 2000 he was a Lieutenant in the reserves and in December 2001 joined the Canadian Armed Forces, as a Lieutenant. He completed Infantry Officer training in August 2002 and was posted to the Princess Patricia’s Canadian Light Infantry at Edmonton. He became a Captain in April 2003 and spent three months in the Middle East. In August 2003 he fought fires near Barriere, B.C. Upon his return to Edmonton he became the Intelligence Officer for the 1st Battalion of the Princess Pats. In 2004, as Operations Captain of the battalion, he trained recruits bound for Kabul, Afghanistan. In 2005, as Training officer, he prepared the 1st Battalion for its deployment to Kandahar in January 2006. He later commanded the joint co-ordination centre in Kandahar City. He returned to Edmonton in August 2006. As of 2007 he was Captain of 1st Battalion of the Princess Pats, stationed at Edmonton.