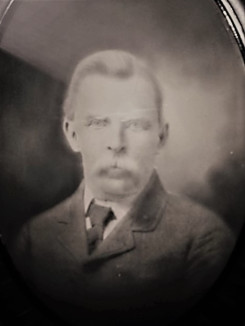 At the age of two, John Rogers Elliott and his parents emigrated from England and settled in North Oxford (at that time it was called East Nissouri).  Around 1855 John's family moved to Clinton, Ontario.  John, who was then 15, stayed in North Oxford and worked on his Uncle Thomas Elliott's farm on Conc 2 Lot 17 or 18 (just NE of the Ingersoll Rural Cemetery) North Oxford.

He was married September 20, 1864 and had had one child by the time the Fenian Raids began.  According to family lore, he mustered with other volunteers just east of Ingersoll on the old highway #2.  He was stationed in Essex County.  It is not known how long he was there or if he saw any action.  He did earn and received the General Service Medal awarded by the Government of Canada.