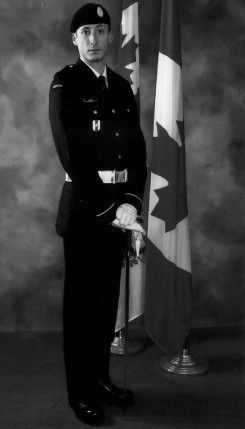 Timothy Andrew Facey, son of Ivan and Joan (nee Boynton) Facey, grew up at Lot 26, Concession 8 of East Nissouri Township. Tim previously served at Canadian Forces Base in Gagetown, New Brunswick.  Currently in 2013 he is a member of the Royal Canadian Dragoons (RCD) with the Queen's York Rangers, 1st American Regiment, Toronto.  The Queen's York Rangers (named for Queen Victoria) is one of the oldest regiments in Canada.  It is a reservist unit or in the 'olden' days it was called a militia unit.  The ‘American’ regiment refers to the continent.  Tim married Nicole Marshall and their children are Zeke, Judah, and Shiloh.